A microcontroller apart from the above mentioned components usually also include, but not limited to, serial communication capabilities, interrupt controls and analog I/O capabilities. The figure below gives the basic layout of a general AVR microcontroller. 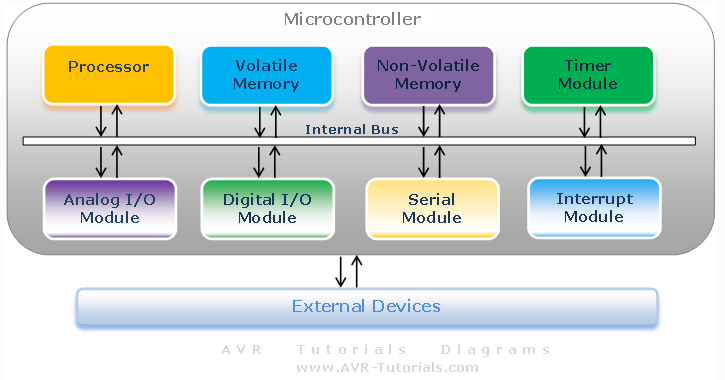 What is a microcontroller?


A Microcontroller is basically a computer on a chip. It differs form normal desktop or laptop computers in that a microcontroller is an application specific computer that usually runs a single program performing dedicated task(s) while the the later two are general purpose computers that can run numerous programs depending on a users needs. A microcontroller contains on chip CPU, input/output interface, memory, clock, timer, and an assortment of of other peripherals.


A Microprocessor on the other hand is just a CPU one has to add externally memory, clock, input/output interfaces, timer and all other needed peripheral. This is the reason a microprocessor has so many pins.

Advantages of a similar microcontroller vs microprocessor product

This category has the following 13 subcategories, out of 13 total.

The following 5 pages are in this category, out of 5 total.