This Instructable will show you how to built a Constant Current for high power LEDs, using only two components.

High power LEDs are getting cheaper and cheaper, however the constant current drivers, to drive them are pretty expensive.

Here, I'll show you how to built a simple and cheap, yet very effective constant current source.

The image shows the constant current driver hooked up to a 1W white Luxeon LED.

EDIT: This LED driver supports PWM, which means that you can control the brightness of the LED(s). Those fancy and expensive drivers doesn't support that. I'll post some schematics and applications as soon as i have time.

Here is a list of the the things you'll need. 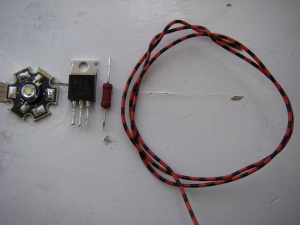 Step 2: How it works

The LM317 regulator gives out a constant voltage of 1,25 volts between ADJ and Vout, so by adding a resistor between these two outputs, you'll get a constant current.

so if you want to connect one or more luxeon 1W LEDs, which has a power consumption of 350mA, the calculation should look like this: 1,25 (the constant reference voltage of the LM317) divided by 0,350 (the LEDs power consumption) makes 3,57. So if the resistor is 3,57, constant current will be 350mA. The closest E12 value is 3,9 ohms, it will give you a constant current of 321mA. However you can't see any difference in the light output.

the resistor must be at least 1W in both calculations.

Although the LM317 is rated for 1,5 Ampere, I wouldn't recommend it for applications that need more than 1 Amperes, because it gets very, VERY hot. the LM350 is equal to the LM317, but it's rated for 3 Amps

The constant current source has a drop voltage of 3 V, so the supply voltage should always be 3 V higher than the LED voltage and can be up to 37V which is the maximum input voltage of the LM317.
Example: You are going to connect two white Luxeon LEDs with 3,42 forward voltage each (mostly mentioned as Vf in common datasheets). The input voltage can change from 9,84V (3,42 + 3,42 + 3) till 37V (3,42 + 3,42 + 30,6).
You can connect up to ten high power LEDs to this circuit.
The higher voltage you supply the LM317 with, the hotter it gets. so it wont be a good idea to supply it with unnecessary high voltage.

This category has only the following subcategory.